This page presents a few recent results from an ongoing project with Dan Murphy at Utah State University.  Many thanks to John Neely for crucial advice and to Sarah, Nicolette, Pajnucci, Austin, Megan and Josh for help with the firing! 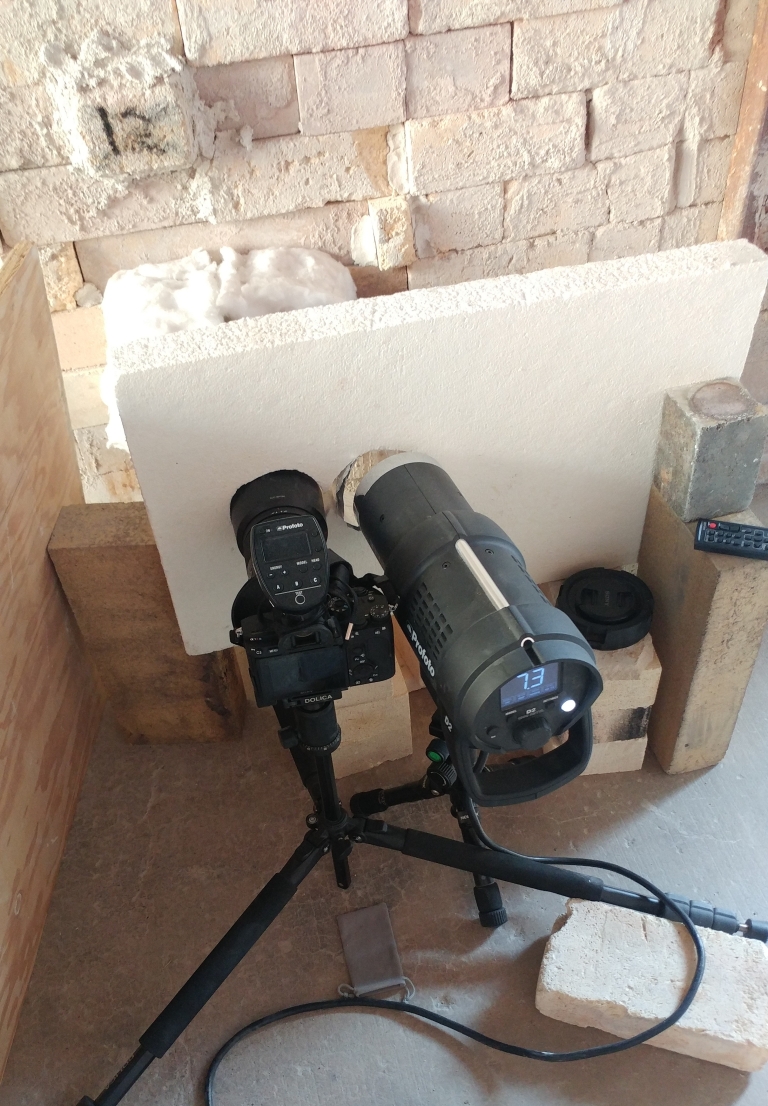 During a cone 8/9 reduction-cool firing in the train kiln at USU we made our second attempt at using a high-temperature imaging setup to follow the development of “reduction-cool red” surfaces on iron-bearing (roughly 3%) clay bodies.  The basic idea of the setup is to take photos through an opening in the kiln wall, using a digital camera with a suitable lens and a high-power flash.  The above photo shows how we set up the equipment; between the kiln wall and the camera/flash we have a refractory fiber board into which we set a pair of clear sapphire windows to shield the equipment from radiant heat.  The opening in the kiln wall is normally plugged by a bundle of soft brick that we remove briefly when we want to take a photo.

The three images in the set below illustrate the principle of the imaging setup.  These were taken in quick succession while the kiln was near top temperature, just before we closed up for the reduction cool.  For this first image we used “normal” exposure settings determined by the camera’s auto mode.  The work in the kiln is incandescent/glowing (emitting visible thermal radiation) as one would expect; we mainly focused on the four “tiles” (actually small square-ish cups, approximately 1.5″ per side, made with Dan’s 50/50 clay body, with engraved serial numbers F120, F121, F124 and F132) in the middle foreground.  One can see from this image that the background areas (deeper into the kiln) are somewhat hotter than the tile faces, and that the embers spilling over from the side-stoke aisle are much hotter.  For the second image in the set we manually changed the camera settings to f/22 aperture and 1/250″ duration, resulting in a “reduced” exposure in which the tile faces appear dark — with these settings the camera is not sensitive enough to yield an image of the tile faces from just their incandescence.  In the third image in the gallery we keep the reduced exposure settings but activate a flash that is bright enough to yield a reasonable reflected-light image of the tile faces, even with the relatively insensitive camera settings.  Using a flash that is bright enough to overwhelm the incandescence of our objects allows us to capture high resolution images in which the apparent surface colors are barely contaminated by their orange thermal glow.

The next pair of images below show views of our tiles after unloading: 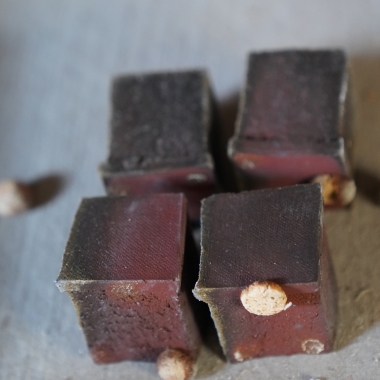 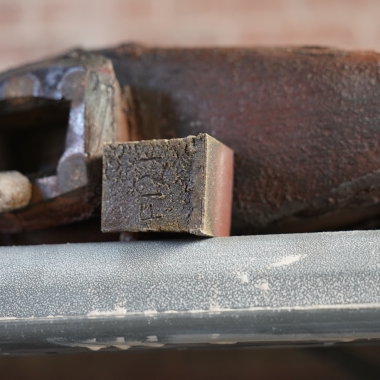 These are fairly typical reduction-cool surfaces for this part of the USU train kiln, with surface areas that accumulated fly ash developing a grey-blue-olive-mustard color palette, and more protected surfaces developing reduction-cool blacks and reds.

Finally, the slideshow below shows a series of images taken during and after the reduction cool.  Please note that in order to see the color changes well it really helps to view these images on a bright monitor.  Also, in this firing we extended the reduction cool to a lower temperature (approximately 1280F) than normal because of some confusion with the pyrometer setup.  We were pretty fastidious about keeping the kiln in reduction during the active cooling phase, as it was cooling quite slowly (we had a lot of work in the kiln and a rather tight stack in the back).

As the red patches in the above images develop mainly in protected areas that not really facing the camera and flash, and are somewhat out of focus, the appearance of those patches are somewhat muted.  The following slideshow displays a magnified detail of just the side of tile F121, with the color saturation digitally enhanced (identical processing of each image):

It was surprising to see the reds develop so late in this experiment, and based on prior experience we would guess that this may have been an anomaly resulting from the low end-point of our active cooling phase.  Had the kiln been allowed to re-oxidize from a higher temperature (e.g. 1400F or 1600F), we might have seen the reds develop much more quickly.  Based on prior experimental firings in which we pulled hot tiles out from the kiln and quenched them in water, we believe that reduction-cool reds can even develop during the late stages of down-firing if some air is allowed into the kiln.

Of course we can’t really conclude much on the basis of this one trial, but we’ll be doing more experiments in the future and working to correlate what we see in this sort of high temperature imaging with data from microscopy and surface analysis.  You can find a brief summary of what we’ve been doing in the latter types of study, in our panel presentation from 2018 NCECA.  Those of you who were at the 2016 International Woodfire Conference in Waubonsee may recall our very first report on this work there as well.

We should note that all of these really only applies to reduction-cool iron reds, which are quite different from other types of reds such as in flashing (not to mention glazes).  For a thorough scientific account of the reds that develop in hidasuki marks on traditional Bizen stoneware, see this article by Y. Kusano et al. or a recent seminar given at Stanford by the same authors.